David Wilkerson on "Witchcraft in the Church" 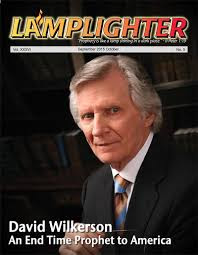 The Holy Spirit had been leading me to many wonderful pastors and preachers of great dedication and precision for over a month now.

One I had been studying the past couple of days was David Wilkerson.

(The link was sourced from Dr. David R. Reagan's "Christ in Prophecy" site.)

The fiery preacher David Wilkerson has this to say about how witchcraft has infiltrated the church in insidious ways.

He also shared an important verse from the King James Version (KJV) of the Bible where the word "witchcraft" was used:


22 And Samuel said,
Hath the Lord as great delight in burnt offerings and sacrifices,
as in obeying the voice of the Lord?
Behold,
to obey is better than sacrifice,
and to hearken than the fat of rams.
23 For rebellion is as the sin of witchcraft,
and stubbornness is as iniquity and idolatry.
Because thou hast rejected the word of the Lord,
he hath also rejected thee from being king.
1 Samuel 15:22-23 KJV

The late David Wilkerson* cautions us to be careful and have a "spirit of discernment" even as he says:

"Demons cannot co-exist with the presence of Christ."